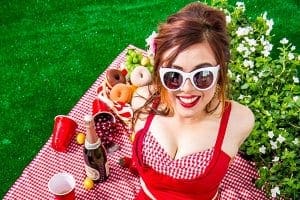 Mix a little country and Cajun with a touch of rock and roll and blues, and you’ll get a sense of the funky Louisiana flavor Amanda Shaw serves up every time her high heels step onto a stage. This immensely talented fiddler and singer, renowned for her sincere demeanor and sassy sense of style, has released five critically acclaimed EPs and albums and become a mainstay of the Louisiana festival circuit. Brown Bag Brass Band is one of Central Florida’s hottest live acts. What started as a pickup band covering a last-minute Mardi Gras gig soon began delivering a horn-driven tour de force, serving the region and beyond. Their music is rooted in appreciation for New Orleans brass band music, but also includes jazz, funk and other styles. Since then, the “b4” has firmly established itself as an integral part of the live scene, characterized as loud, fast, high and generally always playing its own brand of “Good Time Party Music.” In the 10 years that The Katz Downstairz has been together, they’ve become a household name in their native city of Jacksonville, Florida. Providing an unprecedented and unique sound that is an amalgamation of Hip Hop, Jazz and Neo Soul with an unmistakable Urban undertone, they are unrivaled in the city’s current music scene. Their weekly shows are one most highly anticipated and well-attended ongoing events in Downtown Jacksonville. Reminiscent of a “back in the day” type of house party, their throwback style is both an appealing and refreshing breath of fresh air in a music scene long gone stale. Since emerging on the scene in the summer of 2011, The “Katz” have set themselves apart from the typical, run-of-the-mill Jacksonville bands providing a “grown and sexy” yet fun reprieve for Jacksonville’s professional, career-minded, family-oriented crowd. Carl Lewis is a true Texas Tenor. He has a big sound that is only matched by his big personality. He’s a Houston native who trained under the Late Great Conrad O. Johnson, and received musical training at Texas Southern University’s Summer Jazz Workshop, Florida State University, and received his Master’s Degree from Florida A&M University where he was a member of the world-renown Marching 100. LUVU (pronounced “Love-You”) is making it up as they go! From improvised instrumentation and singing to wildly saturated visuals, they are breathing new life into dance music. LUVU was created by Bea and Jared in the spring of 2013 as a cover band with original takes on popular music. Between 2013-2019, LUVU had amassed 1000+ live shows at venues throughout the state of Florida including destination performances across the country and abroad. LUVU has previously opened for Robert Randolph and The Family Band and The Main Squeeze. Past clients include SpaceX, Carvana, the municipality of Gustavia, St. Barts and The Peninsula (Chicago). In March 2020, LUVU had slated their first original live show. Due to Covid-19, this performance was reimagined and streamed via Facebook Live. Its success was the impetus to develop a new improvisational, live looping music experience that debuted on Twitch in September 2020, paving the pathway for LUVU’s original act to bloom. Since this transition, LUVU has been featured in Blondish’s Abracadabra Fest alongside John Legend and Major Lazer as well as Femme House’s Sofi Tukker and LP Giobbi. LUVU’s improvisational music is often compared to therapy as many songs include uplifting themes meant to inspire positivity, creativity, inclusion, empathy, self-acceptance and spreading love and light—all while making you wanna move! LUVU just released their debut single, “Lucky”, a fun-disco bop with universal lyrics of encouragement. Stream it across all music platforms and stay connected to experience the LUV near U! ♡ The Trevor Dreher Trio is returning to Jazzoo after having such a blast performing at last year’s event. The Trio will be bringing back classic country hits and adding three-part harmony to your folk favorites. The Trio debuted at the Pro Rodeo Hall of Fame in Las Vegas in 2019 and has been making the rounds around the Southeast US ever since! You can also find all three musicians fulfilling their love for the stage outside of the group itself. Aaron McCreless performs regularly throughout Florida singing and playing his acoustic guitar, Mollie Lentini sings harmony and plays fiddle for a handful of local bands, and Trevor Dreher shows off his skills as a multi-talented showman by performing as a two-time world champion trick roper when he’s not belting hits on the stage. The Trio is thrilled to return to play at Jazzoo with their feel-good tunes! Chill out with the David Posso Duo as they perform their own smooth renditions of popular songs. Light percussion with acoustic guitars and smooth vocals will create the perfect Coffee Shop sound. David Posso’s original musical expressions are inspired by no one particular style, but rather by an inclusive combination of the wonderful music he has lived, breathed and enjoyed throughout his life. Vibrant rhythms which resonate from his Latin heritage, soulful crooners from the days of old, the unapologetic, deliberate flows of reverent Hip-Hop preservationists, and the heart-strumming delight encountered through the music of Leon Bridges, Jason Mraz, and more. Original recordings are intentionally characterized by uninhibited authenticity and a sincere desire to honor and relate the emotions which accompanied the original musical idea in the moment of its inception. DJ Yves draws on his 25 years of experience as a DJ and his love for music of multiple genres. Music is another way to connect to people and bond by way of sound. When songs drop, hands and feet move, heads bop, hearts pump, smiles go ear to ear and something spectacular and memorable happens. DJ Yves has performed at many different kinds of events from weddings, corporate parties, birthdays/quinces, races, sports events, grand openings, concerts and many more types of celebrations. He believes that every event is unique and reading the crowd to make sure everyone has a great time is his specialty. DJ Yves is a former US Marine, an engineer and business owner. DJ Yves enjoys indulging in his hobbies, working out and enjoying time with friends and family. Jay DiBella has been a percussionist and drummer since age 9. He is a singer/songwriter and has worked with such performers as Kyle Cook (matchbox20), J.R. Richards (dishwalla), Pat Bautz (three dog night), The Beach Boys, Orleans, Jimi Jamison (survivor), Vaughan Rhea (vonray), and Chasen Hampton (buzzfly)… just to name a few. Jay’s songwriting is from the heart, relatable, and acoustic driven. A young musician from Georgia, Jeff Bynum is now making waves in Florida by combining vocals, guitar, percussion, violin and bass in his set. Bynum has been praised as a musical steamroller and a multi-instrumentalist, blending styles from Shostakovich to Daft Punk. He is a former member of Big City Sunrise and is now focusing on his singer/songwriter career.

Be sure to check back here in the coming weeks for more artists!